“…forged in the pits of hell”

Usually we find these creatures, more correctly known as Amblypygids, lurking motionless on earthen embankments or the trunks of trees.  The collective reaction of our guests, more often than not, is a synchronized back-step, several gasps, and a range of facial contortions which all convey the same one emotion – FEAR.

Certainly, the discovery of a tailless whip-scorpion is enough to nudge the inner depths of our subconscious and awaken that primordial urge to flee.  They ARE, after all, arachnids and they DO look scary. My dear husband, Gianfranco, perhaps put it more eloquently than any contemporary nature writer, when he said, “that beast looks like it was forged in the pits of hell!”

Now, this brings me to clarify a certain, very important point. Looks can be deceptive.  First, I should say, tailless whip-scorpions are neither scorpions nor are they spiders.  As mentioned, they are arachnids, with eight legs, but they belong to their own distinct order called the Amblypygi.  Unlike spiders and scorpions, which are just distant relatives, amblypygids have no venom glands.  They are, as far as humans are concerned, completely harmless.  I like to think of them as the “kittens” of the arachnid world.

With a gentle touch, one can easily handle these creatures.  When we encounter Amblypygids on the tour, I like to offer our guests the opportunity to hold them.  Perched on an open hand, albeit a sweaty with anxiety-hand, the whip-scorpion will make no attempt to retaliate.  It will typically sit quietly as the recipient proudly stands in admiration – both for the creature, as well as their own achievement.  For those inclined to hold the tailless whip-scorpion it is, in some way, a chance to break through a psychological glass ceiling, and replace fear with respect for these unique creatures.

The Anatomy of a Superb Hunter –

Over millions of years of fine-tuning, amblypygids have achieved the anatomy of a superb hunter, as well as that of the ultimate escape artist.  Their body’s are flat, enabling them to wedge under bark or holes and crevices in the earth.  During the day, they occupy these hidden spaces, their dark exoskeletons blending perfectly in the shadowy depths.

At night the tailless whip-scorpions will emerge, positioning themselves to ambush passing prey.  To detect their prey – an insect or small frog, they will rely not on the capabilities of their eight eyes, for their vision is poor, but rather a pair of specially modified legs.  The first of the four pair of legs are long, fine, whip-like structures that resemble antennae or tentacles.

For the whip-scorpion, these legs function in many ways like a blind-man’s cane.  They will tap-tap-tap to discover any insect that scurries near.  They are capable of rotating the legs in almost any direction, as well as reaching into holes and crevices.  Remarkably they can extend these legs in opposite directions and are thus able to analyze their surroundings to the rear or off ahead at the same time.  A variety of sense organs on the legs detect the chemical clues of nearby creatures, as well as the vibrations their movements create.

When an insect is detected they will strike quickly.  To capture their prey, they will employ two, spine-laden palps, which extend from the sides of the mouth.  It is the palps which inspired one biologist to describe whip-scorpions as “the living incarnation of the iron maiden”.   While perhaps dramatic, this description is telling, for these creatures do capture and keep their struggling prey in a tortuous grip with their ferocious-looking palps.  Death is often slow.  Because Amblypygids have no venom prey must be eaten alive.

Several nights ago, while walking back home together after the tour, I heard Gian shout in 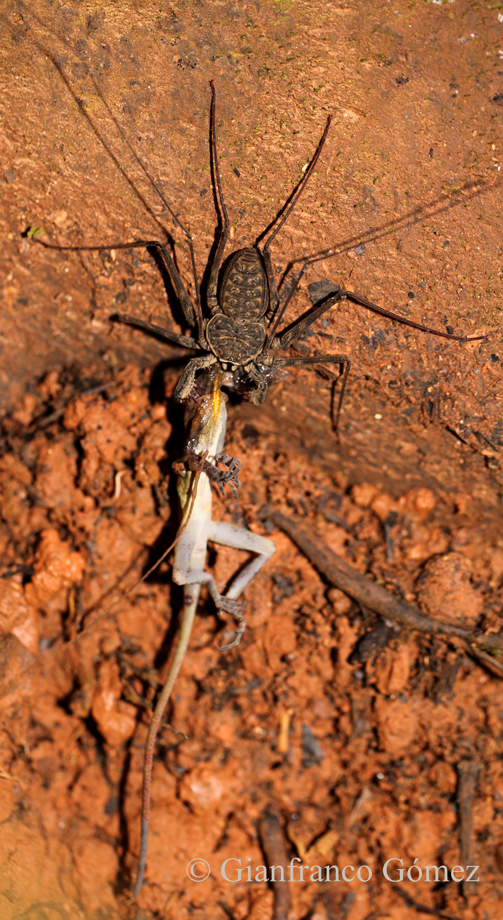 Tailless Whip-Scorpions are capable of eating lizards and small frogs, but will mostly feed on insects

a low, but excited tone, “Ohhhh, Maaaaaan!” He was walking several paces ahead and my immediate thought was “fer-de-lance”.  I was sure he just had a close encounter with one of Costa Rica’s deadliest snakes.  I called out for a confirmation of my suspicion. His reply was shocking, “I’ve just spotted a whip-scorpion eating an anole!”   I quickly hustled up the trail as Gian rushed to set up his camera gear.

As Gian clicked off several shots my thoughts wrestled back and forth –as happens whenever I see any creature being eaten – from sympathy for the helpless lizard to the realization that the whip-scorpion has to hunt to survive – and survive it has – for millions of years.